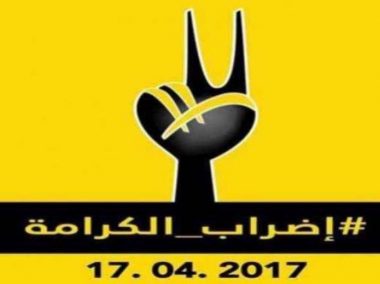 A report by the media committee of the “Freedom and Dignity” hunger strike, has revealed that the Israeli prison administration in Hadarim detention center has transferred at least twenty striking detainees to a hospital.

The committee stated that the detainees were transferred to Meir Medical Center, after suffering serious health complications.

It also said that the detainees in Hadarim prison are subject to daily invasions and searches of their rooms, and that the soldiers frequently confiscate their salt, and continue to isolate them from the rest of the world.

The detainees intend to start escalating their strike in the coming few days, including refusing medical checkups and are considering even stopping drinking water.

Lawyer Hanan Khatib of the Palestinian Detainees’ Committee said she managed to visit Yousef Kamel Za’aqeeq, held in Hadarim, who informed her that Israel is frequently transferring the striking detainees to and from several prisons.

Khatib added that Za’aqeeq informed her that dozens of detainees have suffered serious weight loss, are constantly dizzy, fainting, in addition to suffering from sharp pain, especially in the abdomen, kidneys, and joints.

She also said that Israel is refusing to grant information about the health conditions of many striking detainees, and added that many ambulances are constantly parked in front of the prisons.

It is worth mentioning that the hunger strike started on April 17th, 2017, which also marks the Palestinian Prisoners’ Day.