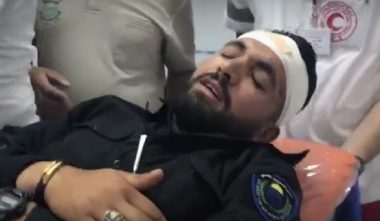 Israeli soldiers abducted, overnight and until morning hours Wednesday, at least fifteen Palestinians in various parts of the occupied West bank, and confiscated large sums of cash from several homes in Hebron city, in the southern part of the West Bank. The soldiers attacked and injured civil guards of Al-Aqsa Mosque in occupied Jerusalem, before abducting three and wounding four.

The soldiers invaded and ransacked homes in Beita village, south of Nablus, and abducted Raed Halabi, who works for St. Yves Catholic Center for Human Rights, and Alqam Issa Hamayel, 24.

Another Palestinian, identified as Mohammad Daoud Abu Sneina, was abducted after the soldiers stopped him at a roadblock in Hebron’s Old City.

The soldiers also closed the Ibrahimi Mosque in Hebron, and prevented the Palestinians from entering it for dawn prayers, allegedly for “maintenance work on its electronic gates.”

In addition, the soldiers invaded Beit Ummar town, north of Hebron, and abducted Mahmoud Ahmad al-Allami, 16, from his family’s homes near the main entrance of the town.

Media sources said the soldiers claimed the Palestinians, who were taken prisoner in Hebron, are members of Hamas, and that the army illegally confiscated 20.000 Jordanian Dinars.

Furthermore, the soldiers invaded Shweika area, east of Tulkarem in the northern part of the West Bank, and broke into what it called a “weapon’s manufacturing workshop,” before confiscated tools and machines.

In occupied East Jerusalem, the soldiers attacked and injured several civil guards of the Al-Aqsa Mosque, before abducting three of them.

Four of the wounded guards have been identified as identified as Arafat Najeeb, Khalil Tarhouni, Nour Abu Hadwan and Nidal al-Wa’ri.