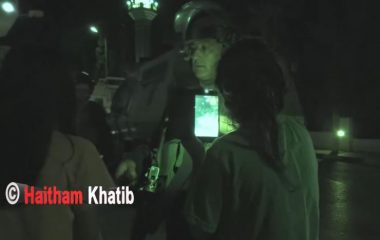 In one of the numerous nightly incursions, Israeli troops invaded the village of Bil’in, west of Ramallah in central West Bank, at 3 am Wednesday, terrify sleeping residents while violently searching their homes and illegally confiscated a laptop.

The army invaded with several jeeps and armored vehicles, and stationed themselves in the center of town, before breaking into many homes of sleeping residents.

Local photojournalist Haithem Khatib said the soldiers also broke into the homes of Abdullah Abu Rahma, the coordinator of the Popular Committee against the Wall and Colonies in Bil’in, and Basman Yassin, and violently searched them, before confiscating a laptop.

He added that the soldiers also assaulted him for live streaming their invasion, wounding him in the chest and neck. The live stream includes the invasion and ransacking of the home of Abdullah Abu Rahma.

Several times during the invasion, which lasted for about an hour, the soldiers fired live rounds.

Bil’in is long known as the center of non-violent resistance during the second Palestinian Intifada, launching the first of what would become years of weekly Friday protests against the Wall and Settlements in 2003.