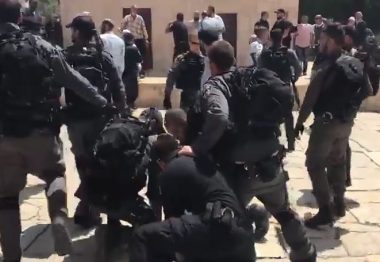 Three Palestinian security guards of Al-Aqsa Mosque compound, in the Old City of occupied East Jerusalem, were assaulted and detained by Israeli police on Wednesday, as hundreds of right-wing Israelis and settlers took to the holy site in celebration of “Jerusalem Day.”

Jerusalem Day is celebrated by the ultra-right religious Zionist community to commemorate the 1967 Israeli annexation of occupied East Jerusalem, the same day which Palestinians remember the “Naksa,” meaning “setback,” referring to the mass displacement that accompanied the Israeli takeover of the Palestinian territory.

As a result of the war, Israel took control from Jordan and Egypt over the majority Palestinian-populated West Bank and Gaza Strip, which remain illegally occupied and blockaded, respectively, to this day.

Al-Aqsa compound director Sheikh Omar al-Kiswani told Ma’an News Agency that Israeli police forces assaulted a group of four of the mosque’s guards at Lion’s Gate, after the guards “objected to the provocative behaviors of Israeli settlers during their raid of Al-Aqsa.”

He said that Najib was initially treated at the compound’s clinic, but was later transferred to a hospital for proper medical care, while the other three injured guards were detained by Israeli forces “despite their need for medical treatment.”

“What happened today is a planned and systematic procedure by Israeli authorities to impose control by force and to terrorize the guards to stop them from doing their job,” al-Kiswani said, adding that the incident was a “clear and provocative move before Ramadan,” referring to the Muslim holy month that is expected to begin on Friday.

The Jordanian government condemned the events at the Al-Aqsa compound as provocative against Muslims, with State Minister for Media Affairs Muhammad Mumani repeating Jordan’s stance on maintaining the status quo agreement only allowing Muslims to pray in the compound, official Jordanian news agency Petra reported.

Mumani held the Israeli government responsible for not reprimanding its officials who incite Jewish extremists to storm the Al-Aqsa compound.

Israeli police spokesperson Luba al-Samri released a statement following the incident, saying that as “Jewish visitors” were leaving the compound, “some of them stopped and started singing the Israeli national anthem. Israeli police forces who escorted them started taking them out of the compound as al-Aqsa guards also started responding with chanting against visitors and attempted to assault them.”

As police forces “stopped” the guards, al-Samri claimed that the guards assaulted the police officers, but made no mention of police officers assaulting and injuring the guards, despite videos showing Israeli forces violently detaining at least one guard, as well as video of one of the guards being taken to the hospital with a head injury.

Al-Samri also said that two guards, not three, were detained for interrogation, while adding that a group of Israelis were detained after “bowing down to pray” at the compound.

The incident occurred as dozens of right-wing Israelis and ultra-religious settlers marched through and toured Al-Aqsa under the protection of police forces in celebration of Jerusalem Day.

Settlers toured the Old City and performed religious rituals at the gates of Al-Aqsa Mosque, while dozens entered the compound in separate groups through the Moroccan Gate.

Meanwhile, a group of activists denouncing the Jerusalem Day parade held by Israeli extremists was reportedly assaulted by Israeli forces on Wednesday afternoon, outside of Damascus gate in the Old City of Jerusalem.

Palestinian activists were waving Palestinian flags at the scene, while international and Israeli peace activists formed a human chain, when Israeli forces violently dispersed them, beating them and pushing them away.

Contrary to al-Kiswani’s claim that over 700 Israelis entered the compound, the general director of the Islamic Endowment, or Waqf, that runs the compound Sheikh Azzam al-Khatib said that more than 470 Israelis had toured the compound since Wednesday morning, noting that tmore were expected to enter the compound throughout the day.

Eyewitnesses said that Israeli settlers raided the compound in groups and performed prayers, in violation of an agreement signed between Israel and the Jordanian government after Israel’s illegal occupation of East Jerusalem in 1967, stating that while Jewish visitation is permitted to the compound, non-Muslim worship is prohibited.

The third holiest site in Islam, Al-Aqsa is also venerated as Judaism’s most holy place, as it sits where Jews believe the First and Second Temples once stood.

In an address in front of the Knesset on Wednesday for the occasion of Jerusalem Day, Israeli Prime Minister Benjamin Netanyahu vowed that the Al-Aqsa Mosque compound — known to Israelis as the Temple Mount — and the Western Wall would “remain forever under Israeli sovereignty,” Israeli newspaper Haaretz reported.

However, the spokesman for Palestinian President Mahmoud Abbas, Nabil Abu Rudeineh, responded to Netanyahu on Wednesday evening by saying that East Jerusalem was the capital of Palestine and would forever remain so.

Abu Rudeineh said that Netanyahu’s statement would raise tensions and further complicate the status quo, as well as obstruct efforts by US President Donald Trump to achieve a Palestinian-Israeli peace deal.

Israeli authorities regularly allow Jewish visitors to enter the site — often under armed guard. Such visits are typically made by right-wingers attempting to unsettle the status quo at the site, and coincide with restrictions on Palestinian access, including bans on entrance and detentions.

Meanwhile, Israeli forces have detained and even assaulted Al-Aqsa security guards on a number of occasions.