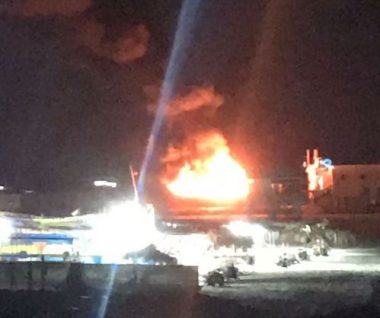 The Israeli Air Force fired, on Tuesday at dawn, several missiles at the Gaza Sea Port, west of Gaza City, targeting at least two boats prepared for welcoming the Freedom Flotilla boat that is currently sailing to the besieged and impoverished coastal region.

Media sources in Gaza said the Israeli missiles targeted two boats in the Gaza Port, and added that the army fired at least three missiles into the port.

Palestinian Civil Defense teams rushed to the port to extinguish the fire; damage was reported but no injuries.

The journey is expected to take more than two months, as the ships will stop at several ports in Europe to hold demonstrations in support of the Great Return March, which began March 30 and saw more than 3,500 Palestinians shot by Israeli sniper fire. Those protests ended on May 15, a known to Palestinians as “Nakba day,” or “day of catastrophe,” but celebrated in Israel as its independence day.

The Freedom Flotilla Coalition said the Flotilla Boat to Gaza is expected to arrive in Gaza in late July. The ships left the port of Copenhagen Denmark, heading to Kiel and Wilhelshfin in Germany before traveling to Gaza.

Three ships have already left Denmark, Monday, and a fourth will be joining them en route as they head to the Gaza Strip.

Four ships with the Freedom Flotilla Coalition are making their way to the besieged Gaza Strip, Gaza Strip. The Flotilla boat is named Al-Awda (The Return), which refers to the Palestinian refugees’ Right Of Return to their homeland, Palestine. The right of return for refugees is an inalienable right, guaranteed by United Nations and Security Council resolutions, and denied by Israel.

— The international Freedom Flotilla Coalition (FFC) has called this year’s campaign “The Right to A Just Future for Palestine”. It is a grassroots people-to-people solidarity movement composed of campaigns and initiatives from all over the world working together to end the siege of Gaza. The campaign partners are: Canadian Boat to Gaza, Freedom Flotilla Italia, MyCARE Malaysia, Kia Ora Gaza [New Zealand / Aotearoa], Ship to Gaza Norway, IHH [Turkey], Palestine Solidarity Alliance [South Africa], Rumbo a Gaza [Spain], Ship to Gaza Sweden, US Boat to Gaza, the International Committee for Breaking the Siege of Gaza and Gaza Freedom Flotilla Australia and “National Collective for Palestine” and “Platform of NGOs for Palestine” [France]. The Freedom Flotilla Coalition’s website is here, and their social media, where they are posting updates about the boat’s progress, can be found on  Facebook, on Twitter and on Instagram. The Frequently Asked Questions about the campaign are here.