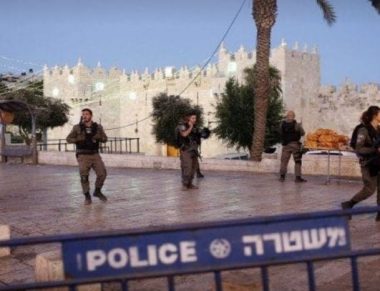 Israeli soldiers attacked, on Tuesday at night, many Palestinians who were picnicking and socializing on the stairs of Damascus Gate (Bab al-Amoud), one of the main gates leading to the Old City of occupied Jerusalem and abducted one of them.

Eyewitnesses said many Palestinians, and after a long day of fasting for Ramadan, were sitting and picnicking on the famous stairs near the gate, before the soldiers assaulted them.

They added that the soldiers also abducted one Palestinian and took him to a nearby police center.

The attack and the abduction came after the soldiers and police decided to close area, including the stairs, and placed iron barriers to seal the stairs’ area, where the Palestinians were picketing and engaging in social activities.

The soldiers only left a small passage leading to Bab al-‘Amoud and the Old City, and forced the Palestinians to leave.

The Palestinians objected to this violation, especially since there was no tension in the area, until the army and police decided to remove them and close the area.