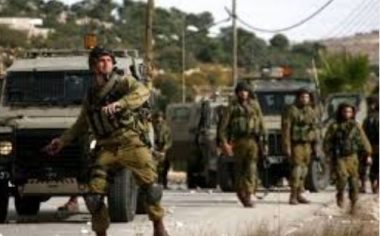 Israeli soldiers abducted, earlier Wednesday and on Tuesday at night, four Palestinians from Hebron and Qalqilia, in the occupied West Bank.

In Hebron, in the southern part of the West Bank, the soldiers invaded homes in Halhoul town, north of the city, and abducted Mohannad Ibrahim Zama’ra, 22.

In addition, the soldiers abducted Ahmad Jamal Radwan, from Azzoun town, east of the northern West Bank of Qalqilia.

The family said their son went missing, on Tuesday morning, while heading to Palestine Technical University – Kadoorie, where he studies, and kept looking for him to be later informed he was taken prisoner by the soldiers.

On Tuesday at night, the soldiers attacked many Palestinians who were picnicking and socializing on the stairs of Damascus Gate (Bab al-Amoud), one of the main gates leading to the Old City of occupied Jerusalem and abducted one of them.

It is worth mentioning that the Palestinian Detainees’ Committee has reported that Israeli is holding captive more than 65000 Palestinian detainees, including 350 children, and 62 women – eight of them are children.

It added that 500 Palestinians are held under arbitrary Administrative Detention orders, without charges or trial, in addition to 48 detainees who were taken prisoner more than twenty years ago.