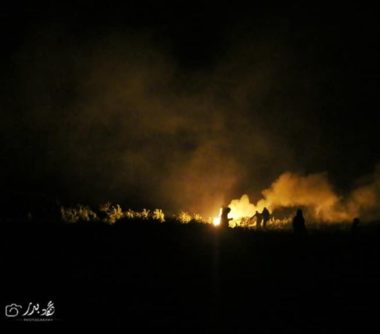 An Israeli military drone fired, on Thursday evening, a missile at several Palestinians, east of Rafah, in the southern part of the Gaza Strip.

Media sources has reported that the Palestinians were protesting on Palestinian lands near the  perimeter fence, east of Rafah.

They added that seven Palestinians were injured and were rushed  to several hospitals.

In related news, the Israeli army said it “fired a tank shell at a Hamas post,” in southern Gaza, and claimed that it was “retaliating to flammable balloons launched from Gaza.”

In addition, Quds News Network has reported that the soldiers also abducted two young men, after crossing the perimeter fence, in southern Gaza.