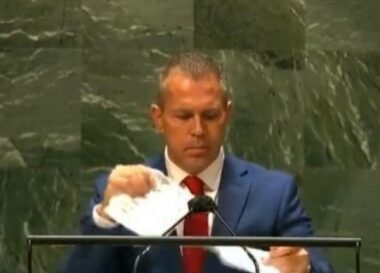 In a move that demonstrates Israel’s contempt and disregard of International Law, Israeli Ambassador at the United Nations, Gilad Erdan, ripped a report by the Human Rights Council, denouncing ongoing Israeli crimes against the Palestinian people.

Erdan, who was speaking in front of the General Assembly, claimed that the UNHRC is “deliberately targeting Israel, and ignoring the terrible crimes against humanity,” and added that since the council started convening 15 years ago, it issued “142 condemnation against its member states, including 95 against Israel, and only 35 against Syria and 10 against Iran.”

The Israeli official then, in a move that disrespects the United Nations and the International Community, ripped the report and said that “its only place is in the dustbin of anti-Semitism,” before walking away.

It is worth mentioning that among the resolutions adopted during the UN Human Rights Council meeting, is a call for forming a committee that would investigate Israel’s latest aggression on the Gaza Strip in May 2021.

It also affirmed the Palestinian right to self-determination, in addition to discussing the dire human rights conditions in occupied Palestine.