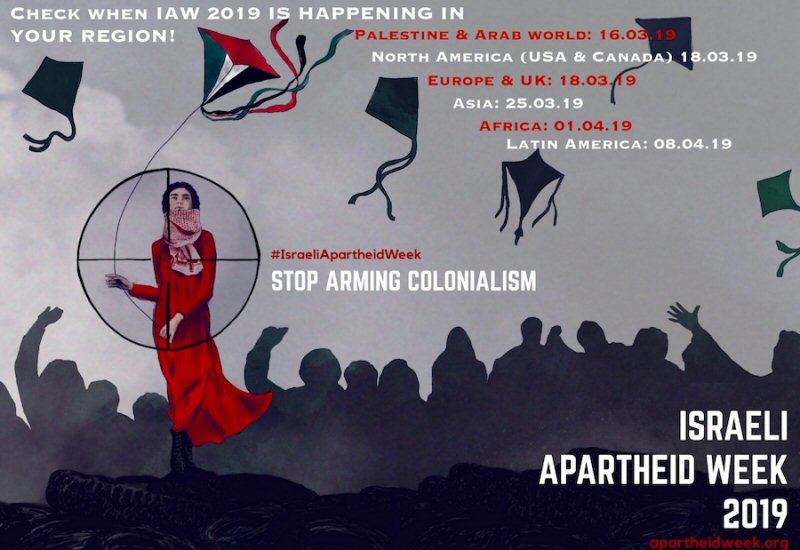 The large BDS Conference in Palestine, and worldwide IAW mobilization in support of Palestinian human rights, are taking place against the backdrop of the far-right Israeli government’s public admission of its legalized and institutionalized racist rule over Palestinians. Last week, Prime Minister Netanyahu himself helped make the case for labeling the Israeli regime as apartheid, saying, “Israel is not a state of all its citizens. According to the basic nationality law we passed, Israel is the nation state of the Jewish people – and only it.”

Israel’s new Nation State Law, evoked by Netanyahu, is one example of a number of Israeli laws that systematically enshrine in Israel’s legal framework racial discrimination and oppression against Palestinians living in the Occupied Palestinian Territory, as citizens of Israel, and in exile, fitting the definition of apartheid under international law.

Israel’s decades-old oppression of Palestinians is increasingly understood for what it’s always been– exclusionary and racist. Israeli Apartheid Week events across five continents demonstrate the rapidly growing grassroots support for the nonviolent, anti-racist and intersectional struggle for Palestinian freedom, justice and equality.

Despite efforts by political leaders to repress it, BDS is inspiring Palestinian and international activists, academics, artists, feminists, students, church organizers, racial and social justice movements, LGBTQ advocates, and others to act in the pursuit of our respective inalienable rights. United we shall overcome.

IAW in 2019 focuses on the demand for a global military embargo on Israel. One more justification for that demand, BDS activists assert, was provided by the new UN report on the Gaza March of Return which found that Israel may have committed and crimes and crimes against humanity by killing close to 200 unarmed Palestinian protesters and injuring thousands. Palestinian civil society, Amnesty International, the UK Labour party and other civil society groups have all called for a military embargo on Israel.

Israeli Apartheid Week is an international series of events raising awareness about Israel’s apartheid regime over the Palestinian people and building support for the nonviolent BDS movement. Many additional IAW events in Asia, Africa and Latin America – where IAW runs from March 24 to April 13 – will be added to the more than 80 IAW events currently on the IAW calendar. Last year IAW events were held in over 200 cities worldwide.

Statements  by IAW organizers in Gaza, Africa, India, Mexico, the UK, and the US follow below.

Israel is violently repressing our Great March of Return for an end of Israel’s siege and for our basic rights, with Israeli snipers killing hundreds of protesters and injuring thousands more. Israel markets the weapons and technology it’s using to attack protesters here as “field-tested.”

Governments are enabling Israel’s violations of international law and war crimes against Palestinians through their support of Israel’s military industry. That’s why, on the one-year anniversary of the March of Return, we in Gaza, and I as a besieged refugee, strongly support the Palestinian-led BDS movement’s demand for a full military embargo on Israel, until we achieve freedom, justice and equality.

The African continent is set to come alive in support of Palestine during this year’s #IsraeliApartheidWeek which will be held in more African countries than ever before including South Africa, Zambia, Botswana, Swaziland, Lesotho, Namibia, Kenya, Mozambique and others.

Organising Israeli Apartheid Week is urgent for us in India because our own struggles for justice and democracy are connected to the Palestinian freedom movement. India is the biggest importer of Israeli arms in the world, and therefore supports Israel’s military occupation directly.

We are building IAW to raise awareness about these ties of complicity and build the BDS movement in our university, with the aim of cutting those ties.

Adrian Ramírez, the Organizing Committee of the Popular Tribunal on Israel’s role in the militarization of Mexico, Mexico:

Israeli Apartheid Week is fundamental to our fight against militarization and the complicity of Israel in the violation of human rights and repression of social movements in Mexico. Israel has contributed military security technology for the US border wall, malware to spy on activists and journalists, weapons that kill our people, and training and advice for the police and the army.

For these reasons, next April 9 we will hold a popular tribunal to denounce the role of Israel in the militarization of Mexico, and to ask our government to immediately end these military and security ties.

This Israeli Apartheid Week, we’re organising a National Day of Action mobilizing thousands of students on over thirty campuses calling for university divestment from companies complicit with Israeli apartheid, as part of the #ApartheidOffCampus campaign.

We aim for more victories like at University of Leeds, which divested from Airbus, United Technologies and Keyence Corporation. And we’ll continue to push for HSBC to divest from all companies arming Israel, as it did already with Elbit Systems. Finally, students will echo the Palestinian call to help end Israel’s violent repression through a military embargo of Israel, and demand that the UK end arms sales to Israel.

Ayesha Khan from National Students for Justice in Palestine in the US:

The participation of Students for Justice in Palestine chapters in Israeli Apartheid Week in the US supports SJPs’ intersectional campaigning for freedom for Palestinians and for all people, often through university divestment from companies complicit with Israeli apartheid, and companies supporting militarization and prisons in the US.

These student divestment campaigns, including victories in the last months at Swarthmore and NYU, contribute to the vital, bigger goal of ending all US military trade with and aid to Israel.