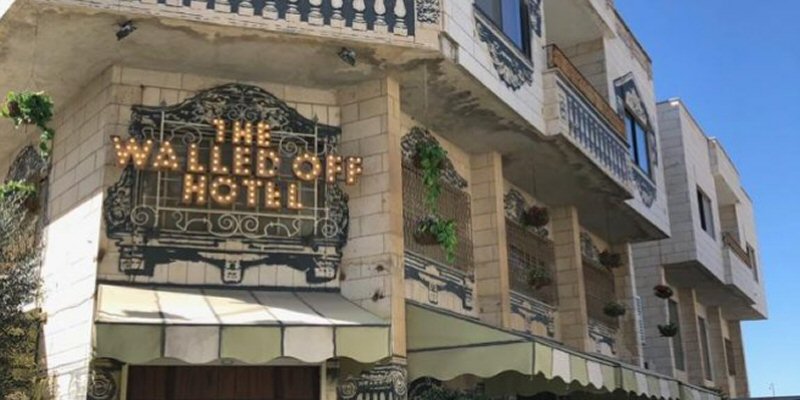 by Alethea Kanas In Bethlehem/PNN

“Most tourists come to Palestine to visit the sacred buildings of Bethlehem, and they miss the sad part, like the wall that destroyed the future of those who live here.”

The Palestinian Wisam Salsaa is general manager of The Walled Off Hotel, which is just in front of the wall to which he referred. Israeli construction in the West Bank began in 2004. Thereafter, several regions suffered from the work – they ran out of agricultural regions and some towns were totally isolated.

The wall has enormous dimensions: an extension of 721 km, 8 meters in height, barbed wires and numerous surveillance towers. Israel’s intention was fulfilled – to drive Palestinians away from Jerusalem and, consequently, the rest of the world. The construction is the result of an intense dispute that dates back to the mid-20th century. Since the establishment of the State of Israel in 1948, until today, the Jerusalem area has been the scene of endless cultural and identity-based clashes that have triggered massacres, wars and intolerances against the Palestinian people. Despite all these problems, Jerusalem itself and also Bethlehem, a neighboring city – which, according to the Bible, was exactly the birthplace of Jesus Christ – are some of the places most frequented by tourists, receive around 4 million a year if we add the two regions.

The Palestinian question has already generated some 5 million refugees, according to United Nations data – most of them live in camps scattered across neighboring countries or in the occupied territories, such as the Aida camp, also in Bethlehem. To try to change this situation, and to bring tourists to know the Palestinian reality, the hotel opened a small shop next to the establishment, where it is possible to acquire sprays, graffiti ideas that symbolize peace and freedom in Palestine. Once the purchase is made, the client chooses a space in the wall and makes his own drawing with the help of one of the employees.

“English street artist Bansky, famous for his works in various parts of the world, including here on the walls of Palestine, had the idea of ​​opening this shop to connect people in this world that we live through art. In this way, everyone who passes by here knows more about the true history of the war and can still express what he thinks, “said Wisam.  The Palestinian calls the project a “physical connection of the foreigner with the war”. And it is not difficult to see that hundreds of them tried the idea of ​​knowing this conflict a little more closely. Some parts of the wall are completely graffiti, all of them with some support for the Palestinian cause. “They have tried to destroy some drawings, especially those involving the president of the United States. But let’s continue with this work, we can not give up showing the world the reality that goes far beyond what is shown in the media, “added the Palestinian.

Artists from all over the world travel to the West Bank to show their art and leave a mark of support and indignation over the situation they face in the territory. But if you are not an artist and want to risk an art in the wall you must pay the equivalent of $ 70. Although the wall is guarded 24 hours a day by Israeli soldiers, who are positioned strategically in observation towers and control everything through hundreds of cameras, Wisam guarantees that graffiti on building is not such a dangerous activity: “Nothing serious ever happened. Rarely do soldiers question, but do not take anyone to jail or do any harm. Their focus is not the tourist. It is not an illegal activity. For us Palestinians illegal is the construction of that wall, they have no right to complain about anything. ”

Inside the hotel, in addition to a decoration that questions the existence of the wall that divides Palestine from Israel – many of them idealized by Bansky -, it is possible to find a museum. Tourists pay about 15 reais and get access to materials used in the conflict, watch real videos about moments of war, and absorb relevant information about the events. “Our team is growing and we currently have 43 employees, all of them Palestinians. The idea is to recruit only locals to try to absorb some of the unemployed population that suffers from the fragile Palestinian economy. ”