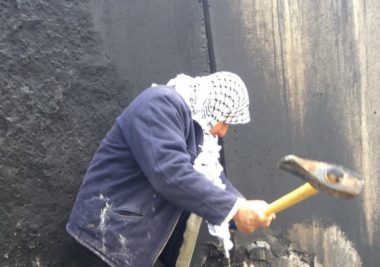 Israeli soldiers injured, Friday, several nonviolent protesters, during the weekly procession against the illegal Annexation Wall and colonies, in Ni’lin village, west of the central West Bank city of Ramallah.

Media sources said many Palestinians, accompanied by international peace activists, marched from the center of the village, heading towards the villagers’ lands, isolated behind the wall.

They added that the soldiers fired a barrage of gas bombs and concussion grenades, at the protesters, causing many to suffer the effects of teargas inhalation.

Some Palestinians used hammers to smash sections of the concrete wall, while the protesters chanted against the ongoing Israeli occupation, its illegal wall and colonies, and the escalating violations the Palestinian people, their lands and holy sites.