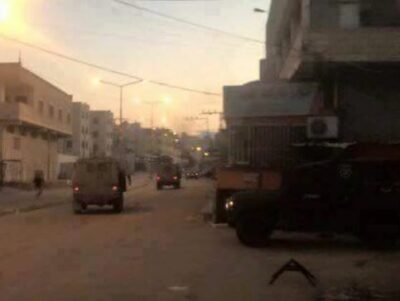 Israeli soldiers abducted, on Sunday at dawn, three young Palestinian men from their homes in Qabatia town, south of the northern West Bank city of Jenin, the Palestinian Prisoners’ Society (PPS) has confirmed.

Montaser Sammour, the head of the Jenin office of the PPS, said several army jeeps invaded the town, before the soldiers stormed and violently searched homes, and abducted the three young men.

Sammour added that the abducted young men, in their twenties, have been identified as Mahmoud Ahmad Abu ar-Rob, Mohammad Tayseer Thiab, and Mohammad Kamil.

It is worth mentioning that the soldiers also invaded Arraba town and Marka village, southwest of Jenin, and drove through various neighborhoods before withdrawing.

In related news, the soldiers abducted, on Sunday at dawn, abducted three young men from their homes in Harmala village, east of Bethlehem, south of the occupied Palestinian capital, Jerusalem, in the West Bank.

It is worth mentioning that, on Saturday at night, the soldiers abducted Hasan Yasser Darwish, 20, Ahmad Issam Darwish, and his brother Majed, from their homes in the al-‘Isawiya town, northeast of occupied Jerusalem, after the army surrounded the village and invaded it.