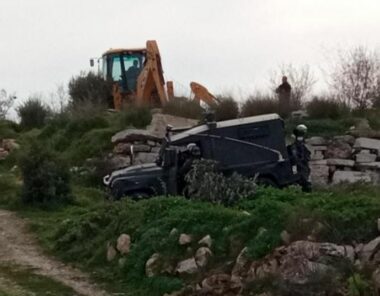 Israeli soldiers invaded, Saturday, the northern and eastern areas of Bruqin town, west of Salfit in central West Bank, before launching a drone to photograph several Palestinian homes, structures, and lands, in addition to their surrounding areas.

Marwan Abdul-Rahman, the mayor of Bruqin, said several army jeeps invaded the northern and eastern areas of the town, after isolating them, and used drones to photograph many homes, structures, and surrounding lands.

Marwan added that there are many homes, sheds, and barns in the two areas, and stated that the soldiers also invaded an under-construction home, owned by Issa Abu Tabeekh, before confiscating construction materials.

The army said the constructions are in Area C of the occupied West Bank, and that the Palestinians are not allowed to build there, although they own the lands and received permits from the local Town Council.

He also said that the soldiers informed a resident, identified as Farouq Barakat, that they will be returning to the town to demolish his home and the home of his son.

In addition, resident Eyad Barakat said the soldiers photographed his barns and added that, in the year 2012, he received a demolition order, before filing an appeal with Israeli courts, and is still awaiting a ruling until this day.

In the year 2018, the soldiers invaded the same area, and uprooted dozens of olive trees, after claiming the lands are “state-owned,” therefore, the Palestinians cannot plant them or work on them, although they are all privately owned by the residents.

On Sunday at dawn, the soldiers abducted three young Palestinian men from their homes in Qabatia town, south of the northern West Bank city of Jenin, the Palestinian Prisoners’ Society (PPS) has confirmed.

In related news, the soldiers abducted three young men from their homes in Harmala village, east of Bethlehem, south of the occupied Palestinian capital, Jerusalem, in the West Bank.

It is worth mentioning that, on Saturday at night, the soldiers abducted Hasan Yasser Darwish, 20, Ahmad Issam Darwish, and his brother Majed, from their homes in the al-‘Isawiya town, northeast of occupied Jerusalem, after the army surrounded the village and invaded it.