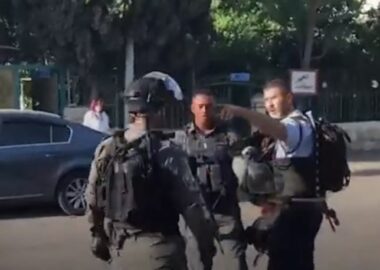 Israeli soldiers abducted, Monday, 35 Palestinians from several parts of the occupied West Bank, including 20 in occupied Jerusalem, after the army invaded and ransacked dozens of homes.

Media sources said the soldiers conducted violent searches of homes and interrogated many Palestinians while inspecting their ID cards, before abducting the 34 Palestinians.

The army also summoned a few Palestinians for interrogation at several military bases in the West Bank, including Jerusalem. The names of seventeen of the Palestinians who were abducted in Jerusalem have been verified.

It is worth mentioning that one of the abducted Palestinians, Khattab Ibrahim Thawabta, 24, from Beit Fajjar town, near Bethlehem, underwent surgery just a few days ago and was still recovering at home.

The soldiers also assaulted many Palestinians in Sheikh Jarrah, in occupied Jerusalem, causing injuries, in the protests tent which was installed to counter Israel’s illegal attempts to displace the Palestinians and replace them with illegal colonialist settlers.

A similar attack took place in the Batn al-Jawa neighborhood in Silwan town, in occupied Jerusalem.

Thirty-one of the abducted Palestinians have been identified as: