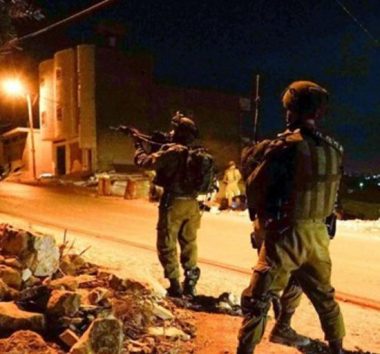 Israeli soldiers invaded, Tuesday, the town of Beit Fajjar, south of the West Bank city of Bethlehem, searched homes and abducted a Palestinian man from his home. The soldiers also stormed and searched homes in a village and a town, near Jenin in northern West Bank.

The Palestinian Prisoners Society (PPS) in Bethlehem said the soldiers abducted Mohammad Taqatqa, 30, after invading his home and searching it.

The soldiers also invaded several neighborhoods in the town, before withdrawing, and took the abducted man to Etzion military base and security center, south of Bethlehem.

Resident Mohammad Faisal Zaghal told the WAFA Palestinian News Agency that the soldiers broke into his home, in Zabbouba, and ransacked it, while a commander interrogated him, asking him about “young men who destroyed section of the Annexation Wall and the barbed-wire fence,” separating many Palestinians from their lands.

In Ya’bad, the soldiers invaded the home of Ezzeddin Amarna, and interrogated him, while violently searching the property.