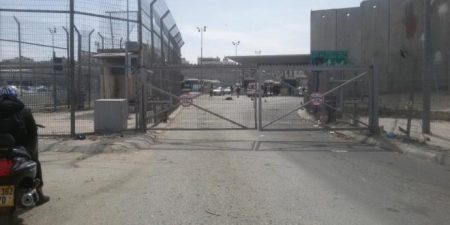 Israeli soldiers shot and injured, on Monday afternoon, two Palestinian women, one of them in her sixties, at the Qalandia terminal north of occupied East Jerusalem, and abducted the younger woman.

The Palestinian Health Ministry said in a brief statement that the soldiers shot a young woman, who remained unidentified until the time of this report, with live rounds, and took her to an unknown destination.

It added that another woman, identified as Khadija Khalaf Sarameeh, 65, was moved to a hospital, after the soldiers fired a concussion grenade at her, causing various burns and cuts.

The army closed the roadblock from both directions, while Israeli police issued a statement alleging that the young woman was shot after failing to heed to the soldiers’ demands, who “ordered her to stop.”

Following the shooting, dozens of soldiers were deployed in the area, amidst escalation tension, and prevented the Palestinians from crossing.

The attack came shortly after the soldiers shot and injured an elderly Palestinian man, identified as Hussein Hasan Qawareeq, 72, at the Huwwara military roadblock, south of Nablus, in the northern part of the occupied West Bank.

Earlier on Tuesday, the soldiers invaded Beit Fajjar town, south of Bethlehem in the occupied West Bank, and abducted a Palestinian, identified as Mohammad Hamdi Taqatqa, 30, after breaking into his home and violently searching it.

The Health Ministry confirmed a girl was shot and injured when she approached the checkpoint, but did not describe her injury, according to WAFA.

Israeli police claimed the girl was shot because she attempted to carry out a stabbing attack.

Israeli police spokeswoman Luba Samiri claimed that “the suspect approached Qalandiya checkpoint on foot, using the vehicular lane. She did not respond to calls of the soldiers to stop,” prompting soldiers to shoot and “neutralize” her.

However, police confirmed later that the girl did not have a knife in her possession.

The girl was only identified as in her 20s, and a resident of the Jerusalem district village of Kafr Aqab.

Meanwhile, an elderly Palestinian woman sustained injuries after being hit with a concussion bomb fired by Israeli forces at the checkpoint.

She was identified as Khadija Saramih, 65, from al-Eizariyya town, southeast of Jerusalem.