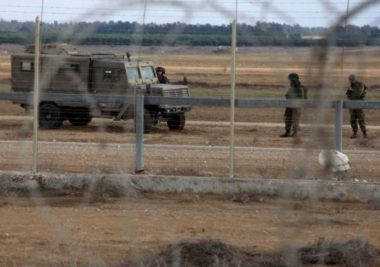 On Saturday night, Israeli soldiers abducted a Palestinian on land close to the perimeter fence, east of Khan Younis, in the southern part of the besieged Gaza Strip.

Media sources said the man was on Palestinian agricultural lands close to the perimeter fence east of Khan Younis when the soldiers pointed their guns at him and abducted him.

They added the Palestinian, in his twenties, did not breach the fence but was on Palestinian land near it when the soldiers abducted him.

The army frequently attacks farmers, shepherds, workers, and fishermen across the eastern parts of the coastal region and in Palestinian territorial waters, leading to dozens of casualties, including fatalities, and preventing the Palestinians from tending to their lands from fishing to provide for their families.