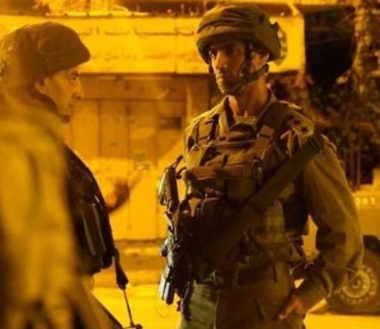 Media sources in Bethlehem said many army jeeps invaded Beit Fajjar town, south of the city, and the al-Obeyyat area in Bethlehem, searched many homes and abducted Mohammad Ali Taqatqa, 18, and Hammam Qaraqe’.

The town has been subject for frequent invasions, and violent searches of homes, while the soldiers also abducted many young men.

Furthermore, the soldiers searched homes in the al-Fawwar refugee camp, south of Hebron, in the southern part of the West Bank, and abducted Mustafa Jawad Silmi, and Ziad al-Adra.

The soldiers also abducted Ziad al-Adra, from his home in Yatta town, south of Hebron.

The army installed many roadblocks at Hebron’s northern and southern roads, in addition to the towns of Halhoul and Sa’ir, before stopping and searching dozens of cars, and examined the ID cards of the Palestinians.

Also in Hebron, the soldiers stopped students and teachers while trying to enter Qortoba School, in the Shuhada Street, and held them for some time before allowing them to leave.