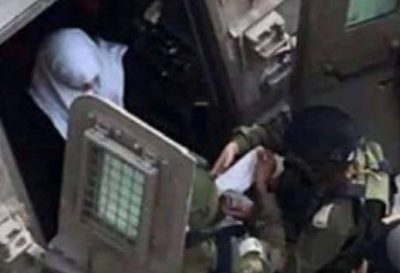 The Palestinian Prisoners Society (PPS) has reported that Israeli soldiers have kidnapped overnight and at dawn Sunday, at least ten Palestinians, including children in different parts of the occupied West Bank.

The PPS stated that the soldiers violently invaded and searched homes in occupied East Jerusalem, and kidnapped seven Palestinians.

In Bethlehem, the soldiers invaded Beit Fajjar town, south of Bethlehem, and Husan village, west of Bethlehem, searched homes and abducted two Palestinians, in addition to summoning two others for interrogation.

In addition, the soldiers invaded the Saff Street, in the center of Bethlehem city, searched a few homes, and summoned Ali Mohammad Hassan, 30, and Moath Mohammad Suman, 27, for interrogation in Etzion military base, south of Bethlehem.

The Hebron office of the PPS, in the southern part of the West Bank, said the soldiers invaded Ja’far Yosri Skafi, 22, from his home in the city.

In related news, dozens of soldiers invaded the ar-Ras al-Ahmar area, southeast of Tubas in the West Bank, and confiscated an agricultural tractor belonging to a local farmer.

Aref Daraghma, a Palestinian expert in colonies’ affairs and Israeli violations in the occupied territories, said the soldiers confiscated a tractor belonging to Sa’ir Yousef Bisharat, and took it to a nearby military base.

Daraghma added that the soldiers confiscated seven tractors from several Palestinians, in the same area, since the beginning of this month.