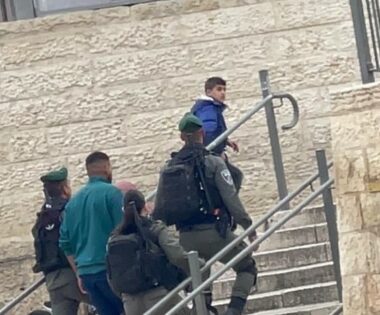 On Sunday, Israeli soldiers assaulted and abducted two Palestinian children and a young man, near Bab Al-Amoud (Damascus Gate), in occupied Jerusalem, in the West Bank.

They added that the children were playing near the Damascus Gate when the army attacked and abducted them, forcing the Palestinians to leave the area.

In a separate incident in the same area, the soldiers abducted a young Palestinian man and took him to a nearby interrogation facility, the Wadi Hilweh Information Center In Silwan (Silwanic) said.

Furthermore, the soldiers installed a military roadblock in the Al-Isawiya town in Jerusalem, searched many cars while interrogating the Palestinians and inspecting their ID cards, and summoned several young men for interrogation.