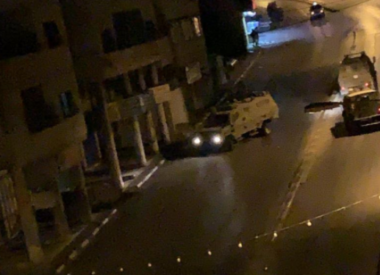 Mousa Hamayel, the deputy-mayor of Beita, said several army jeeps invaded the town before the soldiers stormed and ransacked homes.

Furthermore, the soldiers abducted a young Palestinian man and injured two others in the neck and the back, in Burqin town, southwest of the northern West Bank city of Jenin.

On Thursday at dawn, the soldiers killed Ala’ Nasser Zayyoud, 22, and injured two others in Burqin town, west of Jenin.

In related news, the soldiers invaded the al-Masayef neighborhood, in the central West Bank city of Ramallah, leading to protests, and caused many Palestinians to suffer the effects of tear gas inhalation.

In occupied Jerusalem, the soldiers killed a Palestinian woman, identified as Isra’ Khzaimiah, 30, near the Chain Gate leading to the Al-Aqsa Mosque. Isra’, from Qabatia town, south of Jenin. was a married mother of four children.