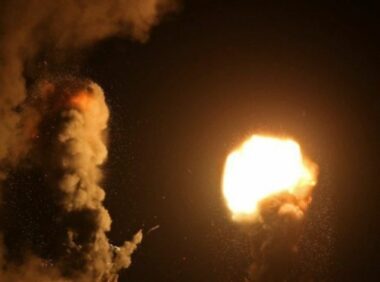 The Israeli army fired, shortly after midnight, several artillery shells, and missiles into a few sites in the Gaza Strip, causing damage.

Media sources said the soldiers fired several artillery shells into a site, believed to be run by an armed resistance group, east of Juhr ad-Deek, in central Gaza, causing damage.

In addition, an Israeli drone fired two missiles at a Palestinian security post, east of the al-Boreij refugee camp, in central Gaza.

The sources added that the army also fired one missile into farmland, east of the Zeitoun neighborhood, southeast of Gaza city.

The army also fired missiles near the destroyed airport, east of Rafah in the southern part of the Gaza Strip, and farmland close to the border with Egypt.

Israeli sources claimed that one shell was fired from Gaza, and landed in an open area near Sderot, and added that rocket alert sirens were also sounded in the area.

In addition, the Israeli army claimed it targeted a tunnel allegedly used for smuggling weapons, and a site reportedly used for manufacturing ammunition.