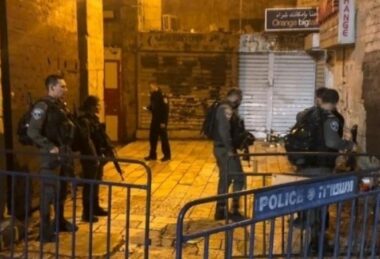 For the third day, Israeli soldiers and police officers continued to attack Muslim worshipers while entering or leaving the Al-Aqsa Mosque in the occupied Palestinian capital, Jerusalem, and assaulted many, on Thursday at night, following evening prayers.

Dozens of soldiers and police officers invaded the courtyards of the Al-Aqsa Mosque compound, and assaulted many Palestinians while forcing them out of the holy site, eyewitnesses said.

They added that the soldiers also fired concussion grenades targeting dozens of Palestinians in Bab al-Amoud area, and chased them into al-Misrara, Nablus Street, Sultan Suleiman Street all the way to Bab as-Sahera.

Police officers also assaulted many Palestinians with batons, and pushed many others away, in an attempt to force them to leave the area.

The attacks took place as dozens of Muslim worshippers were leaving al-Aqsa through the gates of the Old city, among them scores of children, women, and elderly.

The soldiers and police officers also abducted many Palestinians near Al-Aqsa, in addition to closing several streets and alleys in Jerusalem, including the Old City.

The assaults led to massive protests before the police and the soldiers fired a barrage of gas bombs and concussion grenades at the Palestinians.