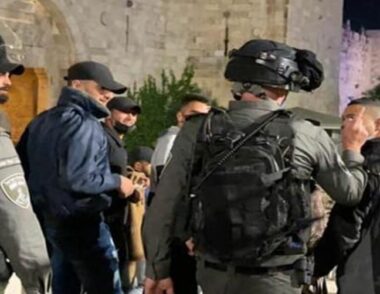 Israeli soldiers attacked, on Wednesday at night, many young Palestinian men while leaving the Al-Aqsa Mosque, after conducting prayers in the holy site.

Eyewitnesses said the soldiers stopped the young men in Bab al-‘Amoud area and assaulted them causing cuts and bruises.

They added that the soldiers also prevented the Palestinians from sitting in the Bab al-Amoud area and fired many gas bombs at them.

The soldiers also stopped and interrogated dozens of Palestinians, while inspecting their ID cards.

The attack took place in the same area where, on Tuesday, the soldiers abducted five young Palestinian men while leaving Al-Aqsa.

|Israeli Soldiers Abduct Many Palestinians In Hebron And Jerusalem|