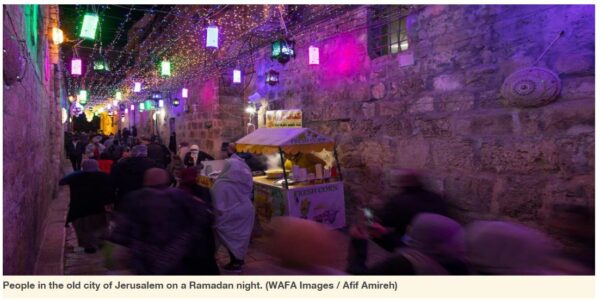 JERUSALEM, Wednesday, April 14, 2021 (WAFA) – For the second night in a row, Israeli police banned the entry of Ramadan Iftar meals to Palestinians at Al-Aqsa Mosque in Jerusalem’s old city, and then attacked Palestinians as they were leaving the night prayers at the Mosque, according to witnesses.

They said that the police refused to allow food into the walled holy compound, which houses Al-Aqsa Mosque and the Dome of the Rock, for the worshippers who were observing the Ramadan fast in order to break their fast at sunset.

This is the second night in a row that the police would not allow meals to the people fasting at the Mosque, a tradition of the Ramadan days in Jerusalem.

Police also banned the call for night prayers at the Mosque for the second night in a row.

At the same time, as hundreds of people were leaving the Mosque following the special Ramadan night prayers and as they reached Damascus Gate, one of the main gates to the old city of Jerusalem, police attacked the Palestinians and prevented them from sitting on the stairs outside Damascus Gate.

The police fired stun grenades at the Palestinians and detained five people, said the witnesses.