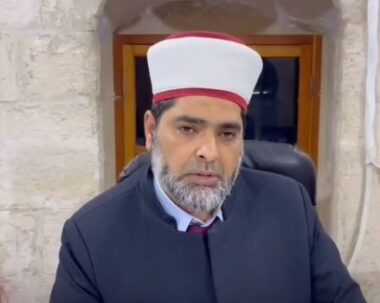 Sheikh Mohammad Hussein, the Grand Mufti of Jerusalem, and the Khatib of the Al-Aqsa Mosque called on all Arab and Muslim leaders, and Muslims around the world, to act on protecting the Al-Aqsa Mosque, which has been subject to seriously escalating Israeli violations.

Sheikh Hussein denounced the Israeli army’s invasion into the holy site and the soldiers’ destruction of its various gates, in addition to the cutting and removal of the electric wires in the minarets of the holy site to prevent the calls for prayers, especially during the current holy month of Ramadan.

The Sheikh added that this attack against one of the holiest sites for Muslims around the world is a serious violation and provocation and held Israel fully responsible for the repercussions of this assault.

“The Israeli occupation authorities are provoking the feelings of Muslims around the world, through such arrogance and racism against Muslims and their holy sites,” he said, “Israel is trying to create facts on the ground by encouraging its colonialist settlers and extremist political leaders to conduct more invasions and violations against the holy site.”

Sheikh Hussein also described the Israeli Police’s decision to deny the entry of meals to the courtyards of the holy site to feed the worshipers after a long day of fasting during the holy month of Ramadan, as another serious provocation and a violation of their basic rights.

He warned that such violations could cause serious tension in Palestine, as well as all Arab and Islamic countries, and target the feelings of Muslims around the world.

Sheikh Hussein called on the Arab and Islamic nations, and the entire International Community to act on ending their serious crimes and violations and added that the silence towards these crimes encourages Israel to escalate its violations.