Soldiers Abduct A Palestinian In Al-Aqsa 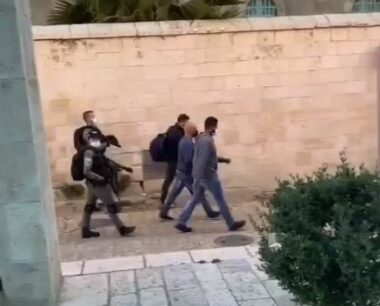 Israeli soldiers abducted, on Wednesday at night, a young Palestinian man in the Al-Aqsa Mosque, in the occupied Palestinian capital, Jerusalem, in the West Bank.

Eyewitnesses said the soldiers abducted Mahmoud Shaweesh from Al-Aqsa, after dozens of soldiers and police officers stormed the holy site and its courtyards.

They added that Israeli intelligence officers accompanied the soldiers and the police in their invasion into the holy site.

It is worth mentioning that the soldiers abducted, on Wednesday evening, another young man, identified as Mohannad Bashiti.

In related news, the soldiers attacked many young men while leaving Al-Aqsa Mosque.