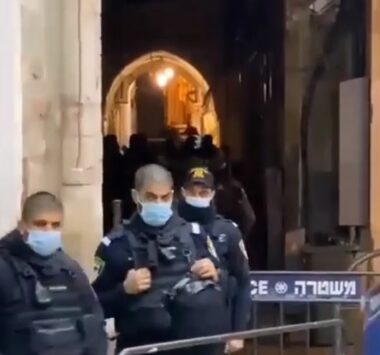 Israeli soldiers abducted, late on Thursday at night and on Friday at dawn, eight young Palestinian men, and assaulted dozens of worshipers, after the army and the police stormed the courtyards of the Al-Aqsa Mosque compound, to remove the worshipers.

Eyewitnesses said the soldiers and the police assaulted dozens of worshippers inside al-Qibli Mosque in Al-Aqsa compound, while trying to forcibly remove them from the holy site.

They added that the soldiers also attacked many worshippers in the courtyards of the holy compound, before abducting seven young men, and took them to an unknown destination.

The soldiers also assaulted many Palestinians in the Bab as-Sahera area, before undercover officers kidnapped a young man.

It is worth mentioning that, on Friday at dawn, the army prevented hundreds of Palestinians from entering Al-Aqsa, and closed all roads and alleys leading to it, by installing more roadblocks and pushing dozens of additional soldiers and officers.

Eyewitnesses said the soldiers only allowed a limited number of Palestinians into the holy site and prevented hundreds from entering the holy compound to pray and mark the first Friday of the holy Muslim month of Ramadan.

They added that the police also detained many Palestinian, who came from several parts of the occupied West Bank, to pray and mark the first Friday, allegedly for not carrying entry permits.

On Thursday, and for the third day in a row, the Israeli soldiers and police officers continued to attack Muslim worshipers while entering or leaving the Al-Aqsa Mosque and assaulted many following evening prayers.