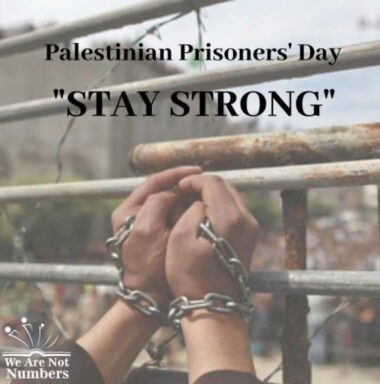 Several human rights and prisoner support organizations issued a joint report ahead of the Palestinian Prisoners’ Day (April 17), and revealed that Israeli soldiers abducted 1400 Palestinians since the beginning of this year, bringing the number of Palestinian political prisoners to at least 4500, including 41 women and 140 children, facing constant violations, and deprived of basic rights.

The report was compiled and published by the Commission of Detainees and Ex-Detainees Affairs, the Palestinian Prisoners’ Society, Wadi Hilweh Information Center in Silwan, and the Center for Defense of Liberties and Civil Rights.

The report revealed that Israeli has escalated its violations against the Palestinian detainees and turned the current coronavirus crises into another venue for abuse.

368 detainees, including children and elderly, have contracted the coronavirus in Israeli prisons.

The compiled data revealed that Israel is holding captive at least 4500 Palestinians in twenty-three prisons, detention camps, and interrogation facilities, among them 41 women, mainly in the Damoun prison and 140 children in Ofer, Majeddo, and Damoun.

It also revealed that twenty-five detainees have been held captive since before the first Oslo Agreement of the year 1993, including Karim Younis and Maher Younis, who have been imprisoned since the year 1983, in addition to Na’el Barghouthi, who spent 41 years behind bars, including when he was held captive for 34 consecutive years before being released and rearrested later.

Furthermore, there are sixty-two Palestinian detainees who have been in prison for at least 20 years, in addition to 543 detainees who are serving at least one life term, including Abdullah Barghouthi, who is serving sixty-seven life terms.

226 detainees died in Israeli prisons since the year 1967, in addition to hundreds who died from serious illnesses and diseases they contracted in prison but did not receive the needed specialized treatment.

There are also 75 detainees who were killed by the soldiers in prison, 73 died while being tortured during interrogation, and 71 due to medical neglect, including four who died last year, identified as Noureddin Barghouthi, Sa’adi Gharabily, Daoud Khatib, and Kamal Abu Wa’ar.

Also, Israel is still holding the corpses of seven detainees who died in its prisons: Anis Doula, who died in the year 1980, Aziz Oweisat, 2018, Fares Baroud, Bassam Taqatqa and Bassam Sayeh, 2019, in addition to Sa’adi Gharabily and Kamal Abu Wa’er, 2020.

There are also at least 550 detainees who suffer from various illnesses and diseases, including 10 cancer patients, who need serious and specialized medical attention, including the oldest detainee, Fuad Shobaki, 82.

Furthermore, at least 440 Palestinians are imprisoned under the arbitrary Administrative Detention orders, without charges or trial.

Since the beginning of this year, the soldiers abducted 1400 Palestinians, including 230 children, and 39 women, while the Israeli authorities issued more than 280 Administrative detention orders.

Most of the abductions this year took place in Jerusalem, as the soldiers have taken prison more than 500 Palestinians, including 144 children and 28 women.

According to the report, Israel has taken prisoner more than 16.000 women since it occupied the West Bank, including Jerusalem, in the year 1967, one of them is the first female detainee, Fatima Barnawi, who was taken prisoner in 1967 and was released in 1977.

Over the decades since Israel occupied the rest of Palestine in the year 1967, its policies against the detainees became yet another method used for inflicting more pain and abuse, especially against ailing detainees who require specialized medical treatment but are denied that basic right, leading to the death of 71 detainees.

There are currently at least 550 detainees who require specialized medical treatment, including more than ten cancer patients.

The report called on regional and international human rights groups and legal organizations to intervene and put an end to the escalating Israeli violations, in addition to calling on the International Criminal Court to initiate an investigation into Israel war crimes, especially after the court ruled in favor of conducting this investigation into the Israeli violations, especially torture.

Despite Israel’s constant violations and its attempts to isolate the detainees and keep their cause away from the medical and public attention, the detainees held repeated hunger strikes and managed to ensure their voices and struggles are heard.