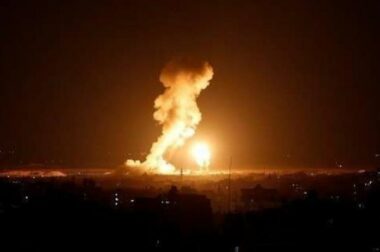 Media sources said the soldiers fired at least two missiles into a building in the Zeitoun neighborhood, south of Gaza city, destroying it and causing damage to surrounding homes.

The sources added that the army fired at least two missiles into a site in the Nusseirat refugee camp, destroying it and causing damage to surrounding property.

The army also fired many artillery shells into Palestinian lands east of Khan Younis, in the southern part of the Gaza Strip.

In addition, the soldiers in military sites across the fence fired many live rounds at buildings east of the Nusseirat refugee camp in central Gaza.

Israeli sources said fighters in Gaza fired shells into Sderot in the Negev, causing damage to one home after the shell reportedly detonated near gas canisters.

The Israeli army said it conducted airstrikes in Gaza in retaliation to the shells and claimed to have destroyed a weapons manufacturing workshop.

The army stated that, while the firing from the shells from Gaza was carried by fighters of the Al-Quds Brigades, the armed wing of the Islamic Jihad, Hamas is responsible for any attack from Gaza.