Hundreds of Israeli Settlers March Through Palestinian Areas in Jerusalem 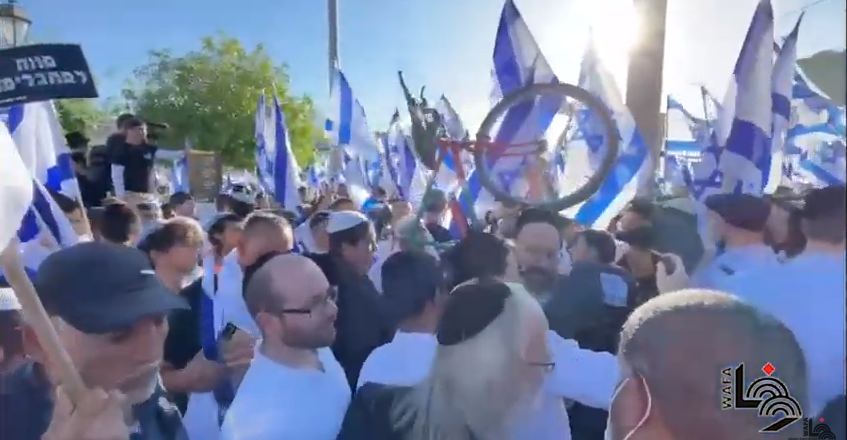 The march was held on the fourth day of the Hebrew Passover, and in the midst of repeated Israeli invasions of the holy al-Aqsa Mosque in Jerusalem. Over 400 Palestinians have been abducted by Israeli forces over the past week while trying to pray at the mosque, and protesting the Israeli aggression.

The march set out from Jaffa Street and marched to the Bab Al-Jadeed (New Gate) of Jerusalem’s Old City.

Itamar Ben Gvir and the other marchers are avowed followers of the late Meir Kahane. A year ago, in 2021, during a similar upsurge of right-wing Israeli attacks on Palestinians and provocations, the Associated Press wrote, “Admirers of Kahane were elected to parliament in March as allies of Prime Minister Benjamin Netanyahu’s Likud party, and one of the most prominent has become a fixture on Israeli TV.

“Their resurgence has injected another element of volatility to the conflict. It’s also part of a broader shift to the right in Israel, where Kahane’s disciples are hardly alone in adopting a hard line toward the Palestinians and trafficking in anti-Arab rhetoric. Right-wing parties that support Jewish settlements and oppose Palestinian independence won a large majority of seats in March, and Netanyahu and other right-wing leaders have often cast Israel’s Arab minority as a fifth column — unless they needed their votes.

“During his lone term in parliament in the mid-1980s, before he was banned, Kahane was shunned by colleagues, including the Likud, and frequently gave speeches to an empty chamber. His racist agenda called for banning intermarriage between Arabs and Jews, stripping Arabs of their Israeli citizenship, and the mass expulsions of Palestinians. At one point, he was suspended for waving a noose at an Arab lawmaker.”

The right-wing march on Wednesday was given support by Israeli police, who blocked roads and established barricades to allow the march to take place.

The marchers claimed they were challenging the loss of “Israeli sovereignty in occupied Jerusalem”. Jerusalem has been under Israeli military control since 1967, but has been the Palestinian capital long before the Israeli military took it over.

In response to the provocative march, dozens of Palestinian citizens of Jerusalem gathered in the Bab al-Amoud (Damascus Gate) area to, chanting slogans and shouting. Israeli forces attacked the Palestinian protesters and abducted one of them after beating him.

The Israeli police closed several streets in occupied Jerusalem, and tried to empty the commercial stalls and evacuate the vendors.