Soldiers Abduct Two Palestinians, Including One Woman, In Jerusalem 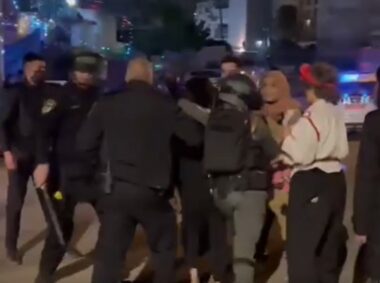 Israeli soldiers abducted, Wednesday evening, two Palestinians, including one woman who was taken prisoner after the army assaulted her and her mother, in occupied Jerusalem, in the West Bank.

The soldiers invaded the Sheikh Jarrah neighborhood in Jerusalem and abducted Nadin Saou, 28, after attacking her and her mother.

The soldiers also maced Mohammad Abu al-Hummus with pepper spray and attacked many Palestinians in the same incident.

The attacks took place when the soldiers assaulted dozens of Palestinians during an iftar gathering after a long day of fasting during the Muslim holy month of Ramadan.

In related news, undercover soldiers kidnapped a young man in Bab al-Amoud in Jerusalem during protests that took place after the soldiers assaulted many Palestinians while trying to force them to leave the area.