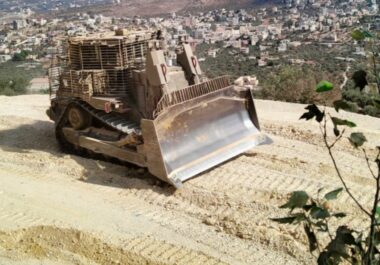 Israeli soldiers invaded and bulldozed, on Friday morning, large areas of Palestinian lands and closed all roads leading to Sbeih Mountain, in Beita town, south of the northern West Bank city of Nablus.

Media sources in Nablus said the soldiers bulldozed large areas of Palestinian lands in the al-Masbah area, in addition to destroying irrigation pipelines and several structures.

They added that the soldiers placed sandhills on all roads leading to the mountain, to prevent the Palestinians from marching to their lands to protest the illegal colonialist outpost that was installed on them.