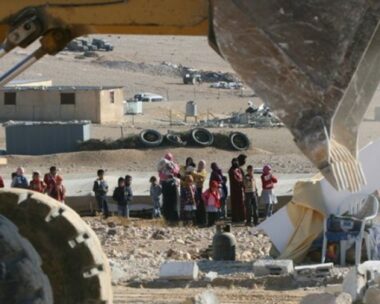 Dozens of Israeli soldiers and police officers invaded, on Tuesday morning, the Bedouin village of al-Arakib, in the Negev and demolished it.

Media sources said the soldiers forced the Palestinians out of their dwellings and tents before demolishing the entire community.

The village’s demolition is the second this year, and the 198 time since the year 2000, including when it was demolished fourteen times in 2021.

Each time the community is demolished, the Palestinians rebuild their dwelling with wood, nylon tarps, and tin to shelter themselves from the cold winters and the extreme summer heat.

They remain determined to counter all attempts to uproot and displace them as part of Israel’s ongoing violations against them in the Negev.

Approximately twenty-two families consisting of around eight hundred Palestinian inhabit al-Arakib and make their living by raising livestock and agriculture; however, Israel keeps displacing them.

In the 1970s, the residents proved ownership of only 1250 Dunams of the thousands of Dunams the Palestinians own in the area.

Al-Arakib is one of the fifty-one villages that predate Israel and remain unrecognized due to the Israeli plans to remove the indigenous people to replace them with settlements, shopping centers, and for military purposes.

It is located to the north of Be’er as-Sabe’ (Beersheba) in the Negev desert, in the southern part of historic Palestine.

Al-Arakib was first established during the Ottoman era and has been subject to constant Israeli violations since the year 1951. It was first demolished, and its residents were displaced on July 27th, 2010.

Al-Arakib village in the Negev is one of the most impacted “unrecognized villages” in the Negev.

The Bedouin communities in the Negev, especially those designated as “unrecognized villages,” although they predate Israel, are subject to frequent demolitions of homes, tents, and structures, including barns, land confiscation, the uprooting and bulldozing of farmlands, along with various other violations.

The Israeli occupation authorities refuse to provide them with basic services such as water and electricity and try by all means and methods to push the Palestinian Arabs to despair and frustration to uproot and displace them.

Moreover, many Palestinian cities and towns in historic Palestine have been facing increasing violations, especially the refusal to grant them construction permits to build homes, industrial workshops, and stores even though they are citizens of Israel and are supposed to be given equal rights.

|Adalah: The Illegality of Israel’s Plan to Transfer Palestinian Bedouin Citizens into ‘Refugee Displacement Camps’ in the (Negev)|