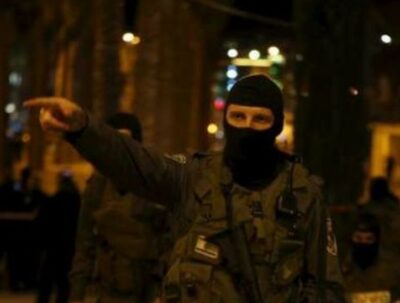 Israeli soldiers abducted seven Palestinians, including a former political prisoner, from their homes in the al-‘Arroub refugee camp, north of Hebron city, in the southern part of the occupied West Bank.

Local sources said several army jeeps invaded the refugee camp and surrounded many homes before invading and violently searching them.

In related news, the soldiers invaded Tubas, in northeastern West Bank, before storming and ransacking the home of Bashar Mohammad Abdul-Razeq, and informed him they were looking for his son, Fadi, but he wasn’t at home. The soldiers told Mohammad that Fadi needed to turn himself in or face the consequences.

Also, the soldiers invaded the al-Jalazoun refugee camp, north of the central West Bank city of Ramallah, searched homes, and abducted ten Palestinians, in addition to wounding one during ensuing protests.

The soldiers also abducted two young Palestinian men from the towns of Jaba’ and Anza, south of the northern West Bank city of Jenin, in addition to Faqqu’a village, northeast of Jenin, leading to protests.