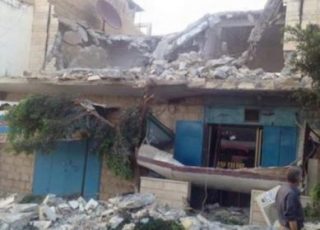 Dozens of Israeli soldiers invaded, on Monday at dawn, the town of Qabatia, south of the northern West Bank city of Jenin, demolished one home and injured at least four Palestinians by live fire.

Local sources said the soldiers completely surrounded the town before invading it, and demolished the home of detainee Bilal Ahmad Abu Zeid, who stands accused of transferring weapons to three Palestinians who were killed in occupied Jerusalem, after carrying out a shooting attack, on February 3, 2016. Deputy Governor of Jenin, Kamal Abu ar-Rob, said the soldiers invaded the town at 3:30 at dawn, before heading towards Abu Zaid’s home, and demolished it.

Medical sources said resident Abdul-Rahman Suleiman Abu ar-Rob, 20, suffered a serious injury after the soldiers shot him with a live round in his chest.

Three other Palestinians suffered mild-to-moderate wounds; they have been identified as Rami Zakarna, 20, was shot with a live round in the shoulder, Anwar Kamil, 17, live round in the leg, and Jawad Kamil, 16, live round in his abdomen. They were all moved to the Jenin Governmental Hospital.

The three Palestinians who were killed during the shooting attack in Jerusalem, has been identified as Ahmad Rajeh Ismail Zakarneh, 22, Mohammad Ahmad Hilmi Kamil, 20, and Ahmad Najeh Ibrahim Abu al-Rob, 21.

Update: 37 killed in Israeli Airstrikes on al-Wihda Street in central Gaza, 8 of them children