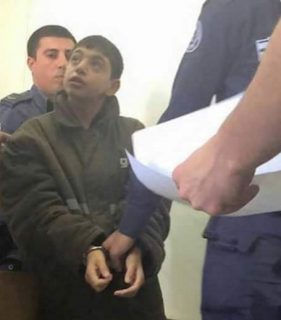 A 14-year old Palestinian boy was sentenced Sunday to 6.5 years in prison for allegedly attacking an Israeli security guard in Jerusalem last November.

Moawiya Alqam was accused of trying to stab an Israeli security guard at the entrance to the illegal Israeli settlement of Pisgat Ze’ev, along with his 12-year old cousin Ali Alqam. Ali was shot 3 times and badly wounded in the incident.

The sentence on Sunday was based on a plea agreement negotiated by Alqam’s lawyer. The case did not go to trial.

In addition to serving 6.5 years in adult prison, the 14-year old child will be required to serve 3 years of probation, which includes a 10-year suspended sentence if he has any parole violations.

Also, Alqam’s family was ordered to pay the Israeli occupation government a fine of nearly $7,000 (This equals more than one year of wages for the average Palestinian). The boy was charged with attempted murder and possession of a knife.

He is one of 414 Palestinian children currently imprisoned by Israel. Most of the children are imprisoned for charges of throwing stones at invading Israeli soldiers.