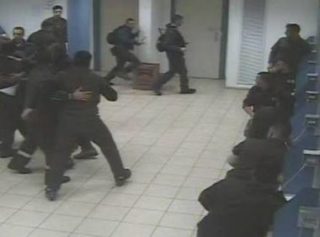 The Palestinian Prisoners Society (PPS) has reported Sunday that Israeli soldiers attacked dozens of Palestinian detainees in Section 5 of the Ramon Israeli Prison.

The PPS said the soldiers invaded room number 72, after completely sealing the entire sections, and repeatedly assaulting the detainees, wounding many of them.

The attack is part of collective punished imposed on the detainees, especially members of the Popular Front for the Liberation of Palestine (PFLP) for their protest and strikes in support of hunger striking detainee Bilal Kayed.

It is worth mentioning that Kayed started a hunger strike on June 15th, protesting being held under arbitrary Administrative Detention orders, without charges or trial.

The detainee was ordered to administrative detention on June 13th, after the completion of his 14.5-year sentence in Israeli jails, where he has been imprisoned since December 2001.