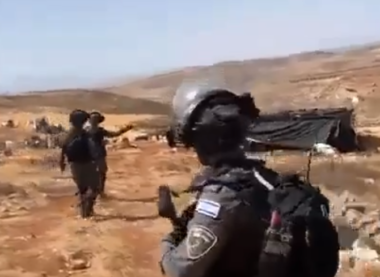 He added that the soldiers demolished and confiscated several residential tents owned by Abdul-Hafith Ka’abna and his son Ibrahim, providing shelter for fifteen family members.

Ka’abna stated that the soldiers also confiscated various belongings owned by the family, before leaving the area.

He also said that the army frequently invades the community, removed and demolishes residential tents and barns, however, the soldiers started confiscating the removed tents and sheds to prevent the Palestinians from reusing them.