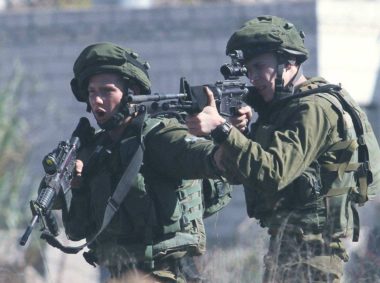 Two Palestinian civilians, identified as, Amir Abu Zina, and Issam Al-Natsheh, were detained by the Israeli army, in the southern West Bank city of Hebron.

The army stormed the Balata refugee camp to detain the youth, which lead to confrontations between the Palestinian locals and the Israeli army.

The Israeli soldiers shot and injured two Palestinian youths who protested the military invasion into their town.

The Palestinian WAFA News Agency said that Israeli forces fired live rounds at the protesters, hitting one civilian in the knee and the other in the pelvis, no further information was provided.

It noted violent confrontations between Israeli soldiers and local youths, on Saturday night, at the entrance to northern West Bank city of Qalqilia, southwest of Tulkarem.

No further information was available.