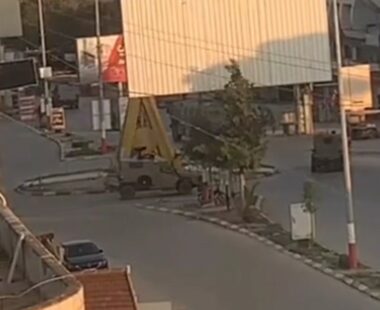 Early Tuesday morning, several armored Israeli military vehicles invaded Jenin city and Jenin refugee camp in the northern West Bank and attempted to abduct some resistance fighters but failed after exchanging fire with them. The soldiers abducted a Palestinian father and his son from their home.

Media sources said the soldiers invaded the city and the Jenin refugee camp from several directions, leading to an intensive exchange of fire with Palestinian resistance fighters.

They added that the soldiers attempted to invade some neighborhoods where it is believed Palestinian resistance fighters were hiding, but the intensity of the gunfire forced them to leave.

During the violent searches of homes, the soldiers abducted a former political prisoner, Bassam Abu Obeid, and his son Taqiyuddin in the Al-Masarwa neighborhood.

Several units of undercover forces also infiltrated Jenin but could not enter the Jenin refugee camp and had to withdraw.

During the invasion, the soldiers stopped Palestinian medics and journalists and threatened to fire them if they entered the targeted areas.

While the soldiers withdrew from Jenin and its refugee camp, Palestinian fighters continued the barrage of live fire until the army left the area.

Furthermore, Salam At-Taher, the director of the Education Department in Jenin, announced that all schools would open at nine in the morning instead of eight to ensure that the soldiers withdraw from Jenin before students, teachers, and staff head to their educational facilities.