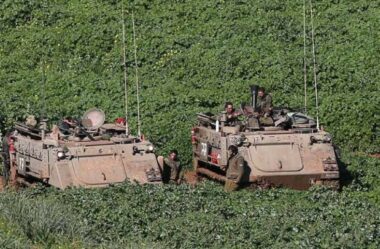 On Thursday morning, Israeli soldiers, stationed across the perimeter fence, fired many live rounds at Palestinian farmers east of Khan Younis, in the southern part of the Gaza Strip.

Eyewitnesses said the soldiers fired many live rounds at the farmers while working on their lands east of Khuza’a and Abasan al-Jadeeda towns, east of Khan Younis.

The attacks did not lead to casualties but forced the Palestinians to leave their lands, fearing additional violations.

Wednesday, the Israeli army, and the navy attacked many Palestinian farmers, shepherds, and fishing boats near Khan Younis and Gaza city in the besieged coastal region.

On Saturday afternoon, Israeli soldiers stationed at a guard tower along the border wall between southern Gaza and Israel opened fire with machine guns toward Palestinian shepherds grazing their sheep east of Khan Younis in the southern Gaza Strip.