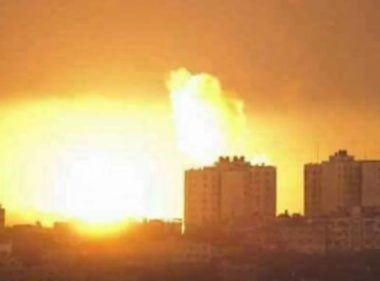 The Israeli air force fired, on Saturday at dawn, several missiles into a few areas, near Gaza city, and in the southern part of the coastal region, causing property damage.

They added that the army fired at least one missile into another site, in the Zeitoun neighborhood, southeast of Gaza city, causing property damage.

The army also fired at least two missiles into an agricultural land, in Juhr ad-Deek area, southeast of Gaza, causing damage to the land and a few surrounding homes.

In addition, the army fired two missiles into another site, west of Khan Younis, in the southern part of the Gaza Strip, destroying the building and causing damage to surrounding homes.

There have been no reports of casualties among Palestinians in the latest Israeli assaults against the coastal region.

The Israeli army claimed it was retaliating to flammable balloons and a shell launched from Gaza, into nearby Israeli areas.

In a brief statement, the army said that a shell was also fired from Gaza and landed in an open area in the Eshkol Regional Council of Settlements.