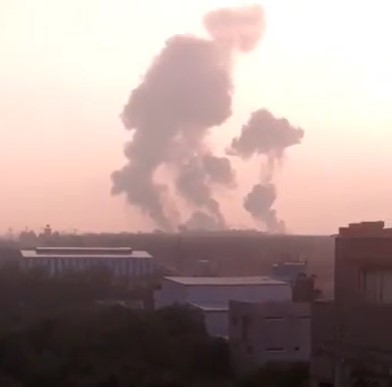 On Saturday morning, the Israeli army fired many missiles at several sites, mainly those run by armed resistance groups in the besieged Gaza Strip, after the army reportedly intercepted a shell fired from the coastal region.

The Israeli army said its Iron Dome system managed to down a rocket reportedly fired from Gaza at Ashkelon (Asqalan) city, fifteen kilometers away.

The army stated it targeted several sites run by the Al-Qassam Brigades, the armed wing of Hamas, in several parts of the Gaza Strip.

The army added that it holds Hamas responsible for any escalation regardless of which groups might have fired the shells.

The Maan News Agency said the shell would be the first to be fired from Gaza since the Israeli war on the coastal region in the summer of last year.

The Israeli Air Force also fired missiles at a security center in the Zeitoun neighborhood, east of Gaza city, and targeted the same site ten minutes later, followed by several attacks in other parts of the neighborhood.

The army also fired missiles at observation posts in Beit Hanoun and Beit Lahia, in the northern part of the Gaza Strip, causing excessive damage.

It claimed that one of the observation posts overlooks the Netiv HaAsara across the perimeter fence, adding that several live rounds were fired from that post into the settlement.