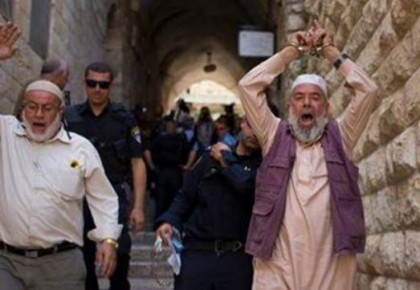 Israeli soldiers invaded, late at night and on Thursday at dawn, many Palestinian homes in occupied Jerusalem and kidnapped fifteen elderly men,  between the ages of 57 and 72, and one man, 43 years of age.

The soldiers also invaded the home of Abu Khader Abu Sneina, 72, in order to abduct him, but he was not there, and left a warrant for his arrest.

On Thursday, the soldiers kidnapped Sheikh Yasser Abu Ghazala, in his sixties, after invading his home in Wadi al-Jouz in occupied Jerusalem, and Sheikh Ibrahim Amira, in his fifties, from his home in Sur Baher vi Both are employees of the Waqf and Islamic Endowment department.

The soldiers also kidnapped a young man, identified as Mousa Tamimi, 30, from his home in Wadi al-Jouz neighborhood, in Jerusalem.

Silwanic said the abductions of the elderly men have been carried out ahead of the Pesach Jewish holiday, as many extremist groups are planning to conduct extended provocative tours into the Al-Aqsa Mosque, especially after they reached an agreement with the Israeli police to “coordinate their tours and activities.”