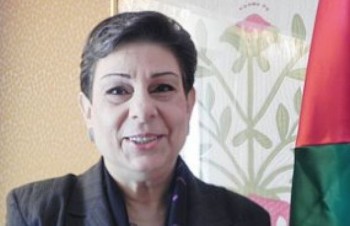 Member of the Executive Committee of the Palestine Liberation Organization (PLO), Dr. Hanan Ashrawi, strongly denounced the Israeli decision to build hundreds of colonialist units in the occupied West Bank, and described the move as part of Israel’s force displacement, and ethnic cleansing, of the Palestinian people.

In a statement released by the Media Department of the PLO, Dr. Ashrawi said the decision by Israeli Prime Minister Benjamin Netanyahu, and his cabinet, to build hundreds of units in occupied Palestine “is part of Israel’s colonialist crimes to eliminate any possibility for establishing a Palestinian state, by turning the West Bank into isolated cantons.”

“This is all part of imposing the colonialist project of ‘Greater Israel’, in occupied Palestine,” she added, “Consecutive Israeli occupation governments built and expanded colonies in occupied Palestine; this is a clear message to the world that Tel Aviv is not interested in peace, but is in fact acting on foiling any chances for a peaceful solution.”

The Palestinian official called on the International Community to act and put an end to serious Israeli violations of International Humanitarian law, and to stop supporting Israel’s criminal and colonialist policies.

Dr. Ashrawi added that the Palestinians, and their supporters around the world, will continue their legal and political moves in various international organizations to achieve the legitimate Palestinian rights of freedom, liberation and self-determination.