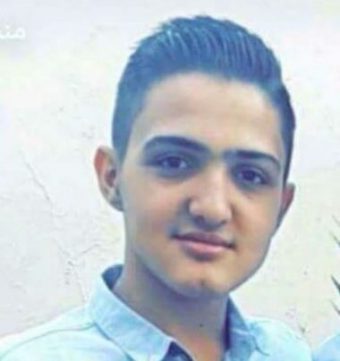 Israeli soldiers shot and killed, on Friday evening, a Palestinian child at a military roadblock near Shu’fat refugee camp, east of occupied East Jerusalem, after the army alleged he attempted to stab a soldier. The child was born with one kidney, and has a disease in the other.

The child has been identified as Mohammad Nabil Zeidan, 14, from Bir Nibala town, northeast of Jerusalem. He was living with his family in Shu’fat refugee camp, in Jerusalem.

Zeidan was born with one kidney, while his other kidney requires regular dialysis to avoid kidney failure that would put his life at risk.

Israeli daily Haaretz quoted the army alleging that the soldiers were inspecting passengers on a minibus coming from Shu’fat, “before the child pulled a knife from his shirt and tried to stab an officer.” After killing the child, the army summoned his father, interrogated him for more than two hours, and then released him.

“We do not know exactly what happened, but we do not trust the army narrative,” his uncle Abdullah Al-Alqam said, “Also, the soldiers could have easily shot him in his limbs, but it appears they just wanted to execute him.”