The Israeli military has posted a status on Facebook threatening the home and lives of a Palestinian family in the Gaza Strip.

Adalah – The Legal Center for Arab Minority Rights in Israel and Al Mezan Center for Human Rights (Gaza) have responded, calling on the Israeli military to immediately halt its threats against the family and other civilians in Gaza.

On 10 August 2017, Yoav Mordechai, commander of the Israeli military’s Coordinator of Government Activities in the Territories (COGAT), announced on the unit’s Arabic Facebook page that the military had discovered two tunnels and related infrastructure constructed by Hamas under a mosque and apartment building in the village of Beit Lahiya.

Via Facebook, Mordechai informed Palestinian civilians living in and around the six-story apartment building and mosque in the northern Gaza town that their lives are threatened by a potential Israeli military attack on the area. 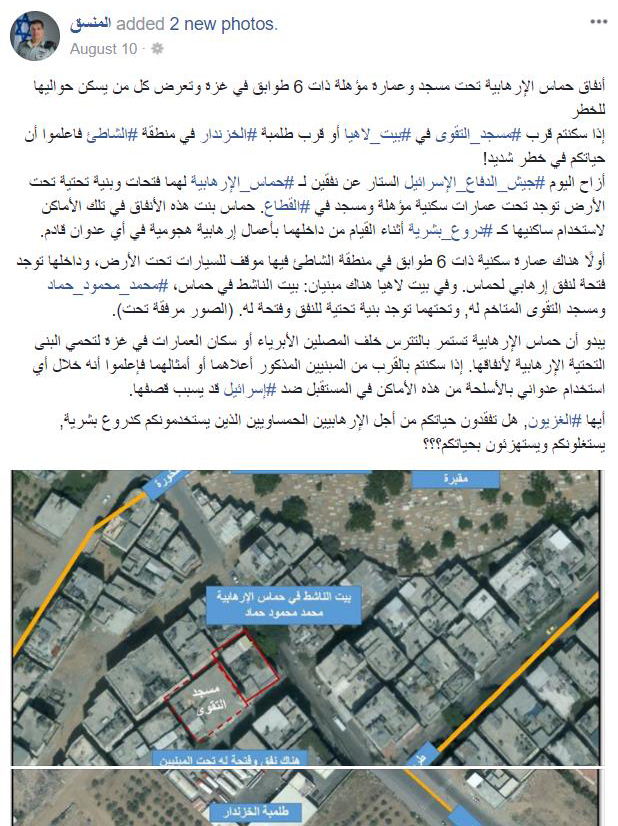 Zamir “warned” that, if necessary, the apartment building could be viewed as a legitimate target of attack and that civilians living there were endangering their own lives. Zamir did not, however, provide any evidence or indication of the existence of tunnels under the buildings.

There are no ventilation tunnels in the concerned apartment building and Hammad is unaware of any tunnels under his home.

Some two days after the COGAT post on Facebook, apartment owner Hammad also received a phone call from an individual who identified himself as a member of Israeli military intelligence. The individual informed Hammad that his life and his family’s lives were in danger as their home was marked as an Israeli military target.

Israel’s claims of tunnels do not justify threats to attack civilians and destroy their homes.

The two organizations also demand the Israeli military halt its threats to Hammad’s home and family and the civilian population in general as attacks on civilians – as well as the threat of attack – constitute overt violations of international law.

According to the Protocol Additional to the Geneva Conventions of 12 August 1949, and relating to the Protection of Victims of International Armed Conflicts (Protocol I), 8 June 1977:

The Israeli social media posts and phone calls cannot therefore be considered a legitimate warning prior to attack as the targets are inherently civilian – rather than military – in nature.

In her letter to the Israeli officials, Adalah Attorney Muna Haddad explained:

“One cannot consider these things as a method of warning prior to attack, as an attack of this sort by the Israeli military would mean a direct strike to a civilian population and civilian target, which is forbidden by laws governing warfare and which borders on war crimes.”

International humanitarian law rules that even the presence of a large number of combatants – themselves ostensibly a legal military target – is not sufficient to justify an attack which would cause disproportionate damage to nearby civilians.

Since the Israeli military issued its threats via Facebook and mainstream media outlets, Hammad and his family have been living in a state of constant fear with the knowledge that their home is liable to be destroyed in an Israeli attack at any given moment, potentially killing the entire family.

In response to the Israeli threats, some family members have fled their home but others are unable to afford alternate housing and continue living under Israel’s ongoing threat.