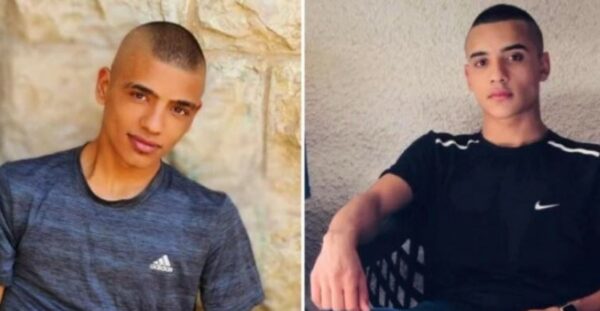 On Friday evening, the Israeli occupation authorities transferred the bodies of two young men, killed by the soldiers on October 3rd, to their families in Ramallah, in the central part of the occupied West Bank.

The General Authority for Civilian affairs in Ramallah said its medics received the corpses of Salama Ra’fat Sharay’a, 19, from Birzeit, and Khaled Anbar Dabbas, 19, from Jifna town.

It added that the two slain young men’s official funeral and burial ceremonies would be held Saturday in coordination with their families.

Israeli soldiers killed the two young men on October 3rd near the Al-Jalazonerefugee camp, north of Ramallah, and refused to allow their transfer to Palestinian medics.

The soldiers also shot and seriously injured a third Palestinian and detained him before releasing him to a Palestinian hospital.

After killing the two young men, the Israeli army claimed it invaded the area “to arrest wanted Palestinians when a car came at them at high speed before the soldiers opened fire at it, killing two and wounding one.”

The army claimed that Palestinians tried to carry out a ramming attack against the soldiers; however, eyewitnesses denied the allegations and said the Palestinians driving the car were surprised by the soldiers invading the area before the army fired several live rounds at them.